A Survey of Modern English covers a wide selection of aspects of the modern English language. Fully revised and updated, the major focus of the third edition lies in Standard American English and British English individually and in comparison with each other. Over and beyond that, this volume explores other Englishes around the world, including those of Australia, New Zealand, and South Africa as well as numerous varieties spoken in southern, eastern, and western Africa, south and southeast Asia, and the Pacific. 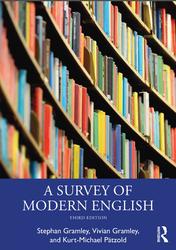 THE EMERGENCE OF STANDARD ENGLISH.
Although the focus of this book is on a synchronic presentation of present-day English, it is useful to take a glimpse at its diachronic (historical) development, since this makes the existence of the countless variants which are present in the varieties of modern English more understandable. In this section we will trace out some of the factors which led to the emergence of the form of English commonly called StE. Standardization generally proceeds in four stages: selection, acceptance, elaboration, and codification.

Selection. At the center of the process of standardization lies power, be it military, economic, social, or cultural. Those groups in a society which are the most powerful (richer, more successful, more popular, more intelligent, better looking, etc.) will be emulated according to the maxim: “Power attracts.” As England began to develop into a more unified political and economic entity in the late medieval period, the center of power began to concentrate more and more in London and the Southeast. The Court had moved from Winchester to London by the end of the 13th century. Gradually the London dialect (or more precisely that of the “East Midlands triangle”: London, Oxford, and Cambridge) was becoming the one preferred by the educated. This was supported by the establishment of printing in England in 1476 by William Caxton, who used an Eastern Midlands regional base in his work. Furthermore, this was a wealthy agricultural area and a center of the wool trade. With its commercial significance the London area was also becoming more densely populated, thus gaining in demographic weight. It was therefore inevitable that the English of this region would become a model with a wider geographic spread and eventually be carried overseas. Today it continues to exert considerable pressure on the regional dialects of England, which as a result are converging more and more toward the standard.

Contents.
List of illustrations.
Preface.
1. The English language: standards and variation.
PART 1 English as a linguistic system.
2. Vocabulary.
3. The pronunciation and spelling of English.
4. Grammar.
PART 2 Uses and users of English.
5. Written and spoken language use: diatypes.
6. Dialectal and sociolinguistic variation: users.
PART 3 National and regional varieties of English.
7. English in the British Isles.
8. English in America.
9. Standard British and American English in comparison.
10. English in Australia, New Zealand, and South Africa.
11. Pidgin and creole English.
12. English as a Second Language.
Key to the exercises.
Bibliography.
Index.