The chapters in this book are all, one might say, about ways of thinking about ethics, politics, and religion in the light of Gödel. Given that we are the limited and weak animals we are, and given that we live in a society, here in Europe at any rate, which has been subjected to over two thousand years of Platonic and Christian education, it seems to us perfectly natural to be concerned with the consistency of what we believe, and also with the consistency of the ways in which we act. It also seems natural for us to try to get a “vue d’ensemble,” a global overview of, ideally, the whole of the universe and of the world which we inhabit. Similarly, what could be more unexceptional than to think that I have a life to live as an individual and that it is of great importance for me to get a “complete” global overview of that life as a whole, if only to try to make it (overall) “good” (in whatever sense of that term is applicable)? 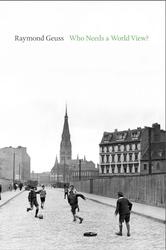 Metaphysics without Roots.
In a photo showing Antonin Artaud just after his release from a mental institution (Figure 8.1), one can see on his face the traces of years of drug addiction, the malnourishment he suffered during the war, and the various “treatments” he was subject to, against his will, once they had removed him from the section for “incurables.” The main treatments were “insulin therapy” and electroshock (fifty-eight sessions, in the course of one of which one of his vertebrae was fractured).

He is seated in three-quarter profile, gazing intently at an invisible point to his left, beyond the right-hand side of the picture frame. He covers his neck with the long, spindly fingers of his left hand, and, with his fingertips on his cheek and his thumb under his chin, he seems to be supporting the right half of his face. Or is he stroking his face? Or both? One mustn’t say that this gesture is “ambiguous,” because Artaud was convinced that gestures had a precise meaning and a logic of their own. A gesture, that is, is “ambiguous” only relative to a possible translation of it into words, but why would one even try to give such a translation, given that language, Artaud thinks, is itself a radically inadequate vehicle of meaning. “Tout vrai langage,” he says, “serait incomprehensible.”

Contents.
Preface.
1. Who Needs a World View?.
2. Games and Proverbs.
3. Enlightenment, Genealogy, and the Historicality of Concepts.
4. Life Is a Game.
5. The Metaphysical Need and the Utopian Impulse.
6. Creed, Confession, Manifesto.
7. Ivan Is Unwell.
8. Metaphysics without Roots.
9. Context.
Notes.
Index.