Practice Tests for IELTS 2 will prepare you for the IELTS test whether you are taking the test for the first time or re-sitting it. It has been written for learners with band score 5-5.5 who are trying to achieve band score 6 or higher. The book, with its answer key and model answers, has been designed so that you can use the materials to study on your own. However, the book can also be used as part of IELTS preparation classes. 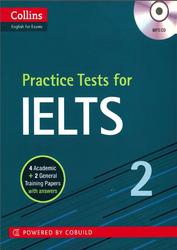 The Humungous Fungus.
If you were asked what is the largest organism in the world, what would your answer be? A blue whale or a redwood tree? Or perhaps a giant squid? You would be wrong. But this is understandable because the world’s largest organism is largely hidden from sight and was discovered only relatively recently in 1998 in the soil of Oregon’s Blue Mountains. It is a fungus nearly ten square kilometres in area and one metre deep. It may be not only the largest single organism in the world but also one of the oldest. Based on its current rate of growth, the fungus is thought to be around 2,400 years old; however, it is also possible that it has been growing for the past 8,650 years. Commonly known as the honey mushroom, the only visible evidence for the organism on the surface is groups of golden mushrooms that grow in forests during the autumn.

The discovery of the organism came about when Catherine Parks, a scientist at the Pacific Northwest Research Station in Oregon, heard about trees dying from root rot in a forest east of Prairie City. Using aerial photographs, she identified an area of dying trees stretching over a 5.6 kilometre area. She then collected samples from the roots of these trees. When she looked at the samples, Parks was able to confirm that many of the samples were infected by the same organism; the fungus had grown bigger than any other creature known to science. A combination of good genes and stable conditions has enabled it to spread. In addition, the dry climate of the region makes it difficult for new fungi to establish themselves and compete with established fungi.